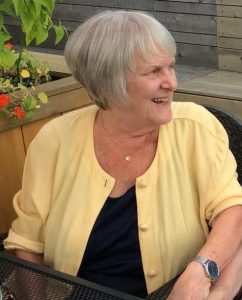 Marian Elizabeth Gelinas was born in Rahway, New Jersey on October 31, 1940. Meg is known by many as Meg Richeson, having taken the surname of her first husband. After her marriage to her second husband, Steven Horn, she also became known as Meg Horn. She died March 16, 2019. Meg Horn obituary 2019

Meg combined her background in libraries and her studies in information science and rural sociology to join two other consultants in creating the ground breaking Alberta Rural Libraries Project, a massive three volume work.

1984 Justice Canada, Ottawa. In this position, Meg advocated federal funding to extend the network of Canadian public legal education and information organizations from sea to sea to sea.  She was involved in major justice policy initiatives on young offenders and impaired driving. She was also the Department’s driving force behind its funding of ACJNet, Canada’s first portal to legal information on the internet.

1997 Justice Canada, Whitehorse. Meg continued working for Justice Canada as a Senior Analyst but was seconded to the Yukon  Her background in development and policy were then tapped by the federal government as a Senior Economist with Indian and Northern Affairs.  She continued working in economic development with the Whitehorse Chamber of Commerce until she retired to Nanaimo, BC in 2011.

1987, Sandra Garvie Award of Merit for her outstanding contributions to the field of Public Legal Education from the Legal Resource Centre of Alberta, Ltd.

Meg received the coveted Public Service leadership award
in 1994 for her role in creating the Access to Justice Information Network (ACJNet), Canada’s first portal to legal information resources and services.